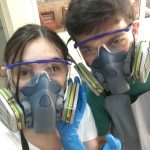 The Performance Effect of TiO2 Usage in DMFC

Topic: Open Stem Topic
Media Type: Video
In this study, we have investigated how the TiO2 nanoexchange can be added to the PtRu/C anode catalyst conventionally used for DMFCs to achieve maximum performance. In addition to the improvements made in production, we have also examined in detail the working conditions of the DMFC. How an interaction between the working temperature of the cell and performance is important for future studies. The performance increases provided by the DMFC, which will be run on optimal conditions, are often mentioned by authorities as they have an accelerating effect on the commercialization of DMFCs. It should be taken into consideration that the concentration of the methanol-water mixture to be sent to the cell by all means is also a very effective parameter on performance. The methanol-water mixture which is sent less frequently than is required will perform poorly as a result of MOR, whereas the more concentrated methanol-water mixture will lead to undesired methanol passage to the cathode side by the anode, resulting in poisoning in the cathode catalyst and a significant decrease in performance.
Finalist
7,432
4,798
878
The Performance Effect...
Universe MDAG2VideoTR
Share on Facebook
Tweet on Twitter