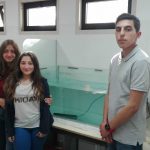 Topic: Bionics
Media Type: Video
This project aimed to verify the effect of several natural substances with anti-fouling power, including anemone extract, crab exoskeleton extract and formic acid. To evaluate the anti-fouling effect, we used mussels, and counted the number of byssus filaments which formed in each experimental condition. The mussels were carefully cleaned with a scissors to remove all remnants of existing byssus and were placed on a tray and submerged in seawater for 10-15 minutes. The mussels which exhibited a “substrate search” behaviour, characterized by a hyperextension of the foot outside the shell, were selected. The selected mussels were then distributed by Petri dishes, 3 treatment dishes with 3 individuals per dish, which will serve as replicates of each treatment. We put 60 ml of filtered seawater in 3 Petri dishes, 60 ml of copper sulphate solution (5 pm) in another 3, and repeated the procedure with formic acid solution in a third set of dishes; then we put 60 ml of anemone extract in another set of 3 Petri dishes and 60 ml of crab shell extract in yet another set of dishes. The Petri dishes were properly labelled, and wrapped in aluminium foil to maximize the byssus production. The dishes were placed in equal conditions for a period of 24 hours. After 24 hours, each mussel was observed individually with a binocular lens and, using a tweezers, we verified whether there was adherence to the substrate (Petri dish) through byssus production and, if this was the case, we registered the number of produced filaments. After this activity, we concluded that all the substances we used have some anti fouling efficiency, the anemone extract being, by far, the most efficient. We also concluded that these substances reduce or prevent the formation of byssus without killing the animals.
Finalist
987
570
139
Don't dock here
Science is ...AG2VideoPT
Share on Facebook
Tweet on Twitter