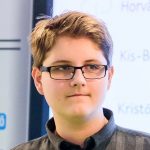 Topic: Assistive Technologies
Media Type: Video
The integration of deaf-mute people in our everyday life has been always a challenge for our society. The Show Me! (Mutasd!) app opens the door to anybody to easily learn to communicate with deaf-mute people. The application is intuitive and user friendly and the methodology applied for learning the sign language provides an easy and entertaining way for practicing. The main goal was and is to make this special language more popular, especially for the younger generation, so they become more open and more interested in the deaf-mute culture.

The concept is simple. Two virtual hands and an intuitive, user friendly and minimalist interface greet the user. The three-dimensional animated hands do the gestures corresponding to the word which the user types into the search bar. If the app doesn’t recognize the word, the hands do the gesture for each letter of the input, one by one, based on Fingerspelling. Cheerful images appear behind the hands, which help memorizing the gestures and which are appealing and engaging to the younger audience.

One of the most important elements of the learning process is practicing. One of the practice modes is focusing on better understanding. Here, earlier learned signs appear and the user is asked to type the corresponding word, with which they learn points or lose virtual lives.

There is another work-in-progress version of Show Me!, which lets the user experience the app in virtual reality. The 3D hands and images in virtual reality makes the app and sign-language more appealing and easier to learn for the younger audience. This version is currently being developed for the Google Cardboard headset, which only requires a smartphone to work, which makes this a cheap way for schools and kindergartens to make them able to teach children about sign-language and the deaf-mute culture.

According to WHO approximately 10% of humanity is hearing-impaired. Over 5% of the world’s population, more than 360 million people has disabling hearing loss (328 million adults and 32 million children). The numbers are just increasing because of the changing natural conditions. In Hungary, the number of hearing-impaired people is close to a million, which is 10% of the population. In 10 years, the number of deaf-mute people has increased by 15.85%.

This project is a small step, but small steps can help build a bridge between hearing people and with hearing disabilities. I believe that making an impact on a person has to start in their childhood. Therefore, it’s really important to integrate this topic into the education, so children will be more acceptable and it will be natural for them to live with children with such disabilities.

Show Me! (Mutasd!) is available for free for iOS, Android, Windows and Mac platforms from the App Store, Google Play Store and the project’s homepage: www.mutasdapp.com.
The project also has a Facebook page, where you can get notified about updates and follow the development of the app: www.facebook.com/MutasdApp
2,228
1,547
227
Show Me! (Mutasd!) - I...
Roland HorváthAG2VideoHU
Share on Facebook
Tweet on Twitter