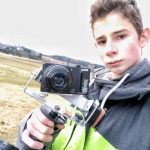 Topic: Assistive Technologies
Media Type: Video
This schoolyear, I entered Gimnazija Vič as a freshman. I joined Photo and film club where I met a member with cerebral palsy. Students with motion impairments have great ideas and they can be screenwriters, directors, and actors, but they cannot use a camera without a special gadget – gimbal. In filmmaking and photography, some level of stabilization of camera is usually required; the lack of ability to hold the camera leveled and stable makes footage useless. This is the main problem that an advanced photographer/cameraman as well as a camera operator with motion impairments are facing. A perfect solution is to buy a gimbal (an electronic device that keeps the camera in certain position regardless the movement of the frame) but a suitable gimbal costs over 500$. At this point, I got an idea to build a gimbal at much lower price myself, and gain a lot of new experience and knowledge at the same time.
I decided to work with Arduino platform – a microcontroller that runs on a modified version of C++ programing language. For motion sensing I used MPU-6050 sensor and as motors I used two inexpensive servomotors. Since my gimbal did not work very smoothly at the beginning, I made several measurement of a motion sensor and servo motors that I was using to get to the core of the problem. I came to conclusion that motion sensor worked just fine but that the servomotors did not, so I installed motors of somewhat higher cost and quality; they performed significantly better. In seven months, I built several prototypes of a gimbal in order to improve its performance.
At the end, I managed to build an affordable gimbal of good quality. The target price was 100$; the final cost of my DIY gimbal is about 60$, and the price of comparable commercially available ones is more than 500$. Although these expensive gimbals include some nice features, my DIY gimbal will be able to provide almost all of these features just with a few upgrades (smaller battery and smaller Arduino, Bluetooth connectivity and control, 3D printed frame).
Besides the very low price, another advantage of my project is the DIY concept. With simple instructions, anyone is capable of making his own gimbal for as much as 60$. The low price of my gimbal brought up an interesting business idea – I should prepare a DIY gimbal kit for sale. DIY kit would be perfect for beginners in filmmaking on a low budget, but also as a simple project for people starting out with electronics.
My DIY gimbal could also be considered as a product of Assistive Technologies, which support people with disabilities worldwide, they offer them a level of independence and improve the quality of their lives. The product I developed could be adapted for various uses in a number of situations, e.g. I could adjust my device for stabilizing a paintbrush for painting or for balancing a glass full of liquid.